Dr. Steve Johnson has been practicing dentistry in the Kelowna community for more than 30 years. He takes pride in offering his patients the highest quality of dental care. 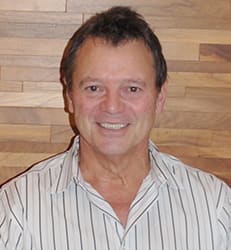 Dr. Steve Johnson obtained his degree in dentistry from the University of Liverpool in 1982. After which he worked in the Maxio-Facial Facility in The Royal Liverpool Hospital.

In September 1983, Dr. Johnson started working for the Government of Newfoundland and Labrador with the Grenfell Regional Health Authority. This organization provided health services to outlying communities in Northern Newfoundland and Southern Labrador. In this capacity, his scope of practice ranged from general dentistry to major facial trauma and reconstruction.

In early 1985, Dr. Johnson moved to the St. Johns area of Newfoundland where he owned and operated two private dental clinics, one of which was in Ferryland and the other in Trepassey. Dr. Johnson moved to Kelowna to open his practice in July 1987, and completed his National Dental Examination Board Certification.

Dr. Johnson and his wife, Kathryn, have four sons and have been long-time resident of Kelowna. Dr. Johnson has been involved in the local dental society, has held all position on the executive, is a past member of The Rutland Kinsman Club, is a past 12 year member of The Tucker Gold Study Club, has contributed to the Gospel Mission Dental Clinic and actively supports the Freedom’s Door Society.

Over the last several years, Dr. Johnson has taken a keen interest in dental implants, as well as single-visit ceramic restorations. He has taken and continues to take many educational courses and clinics, allowing him to offer a comprehensive array of dental services.

Our Kelowna dentists are always happy to accept new patients in the Okanagan Valley.